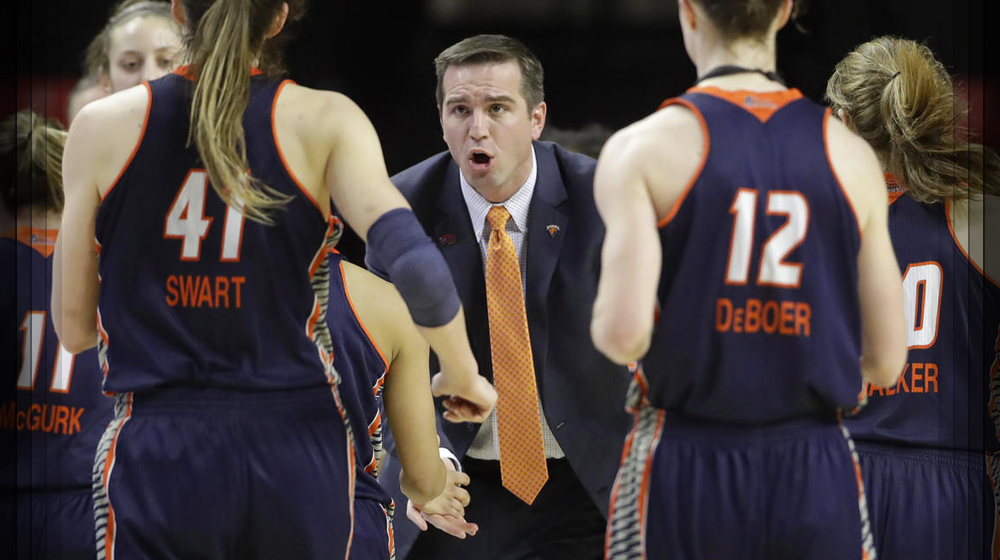 His road may have been unconventional, but Bucknell women’s head coach Aaron Roussell was determined to have some fun, prepare better than anyone else and build the relationships that matter on and off the court.

Tell us a little bit about how you started out.

Growing up, basketball was on my mind. I played in high school and on my summers off at college, I coached AAU boys. There was never any doubt that I loved the sport and I loved coaching; the only doubt I ever had was whether I could make a career out of it.

After I graduated from the University of Iowa in 2001, I went to Minnesota State to earn my master’s degree in sports administration and worked as a graduate assistant for the women’s basketball team.

At the end of my GA tenure, I’d applied for 83 jobs and didn’t have a single interview. Not one. My doubts on whether I could make a career as a basketball coach were at a record high. But by some miraculous wonder, I secured a job at the University of Chicago as an assistant coach in mid-September.

Two weeks later the head coach who hired me left for another job.

So where did that leave you?

It left me in a state of “what the heck do I do now?” I didn’t think whoever took over would want to keep the same staff, and that I was out of a job just two weeks after landing it.

I remember it was October 1st and the athletic director came in and said, “I don’t know you. I don’t know if you have a basic out of bounds play, but I also don’t have anyone else lined up so, congratulations, you’re the new interim head coach this year.”

It wasn’t the new head coach hire speech I’d imagined one day hearing, but it started my 15+ year career in basketball. So, I took it.

Probably the road less travelled when it comes to finding that first head coach position, but you landed it. What philosophies did you develop early on?

I was 25 when I started and nervous beyond comprehension, but because of the situation, I was determined to have some fun with it. The two weeks before the season started I watched as much film as I could. I was lucky to have the internet even then and spent hours on hours watching film, taking notes on how other teams played, learning from plays I liked and expanding on them.

We’ve always said we’re going to be over prepared and better prepared than any team we face. Preparation for us means taking a look at the new technology out there, looking at the services and then closing the deal so that our staff and our team are in the best situation with the best chance to succeed.

I didn’t grow up in the technology age, but my view is we can sit here and complain about how kids learn differently and don’t respond the same ways we used to or, you can choose to make an adjustment. I think part of our job is having to get a feel for our audience and adjusting to them and meeting them at their level to a certain extent. And that’s been the biggest benefit Just Play, the new technology system we use, has had for us in our program; these guys have knocked it out of the park with the way they’ve provided these services in regard to video and preparation and the platform they use to access all of the information in one place.

You were at University of Chicago for eight years and have now been at Bucknell for five; as you’ve added more years under your belt as a head coach, what’s something that’s stayed with you over the years?

Relationships. I’m a relationship person; I think the older you get the more you try to be a mentor and you try to do the things that make a positive impact on the younger people. I was very fortunate to have a great family system; two wonderful school systems to work for; and a number of hard-working young women I’ve coached over the years.

As much as I looked up to my role models and mentors when I was young, my priority now is to make that kind of impact now.

Aaron Roussell is Bucknell’s women’s basketball head coach and a two-time Patriot League Coach of the Year. He will enter the 2017-18 season with a career record of 262-106 and a Bucknell record of 101-56.