The term RPO (Run, Pass Option) is currently the buzzword of football. In my opinion, a true RPO is the combination of a run blocking scheme (ie: zone scheme, gap scheme, on/isolation scheme) with a forward pass thrown beyond the LOS. Notice I write ‘forward pass thrown beyond the LOS’, meaning an option to throw the football past the line of scrimmage (LOS) based on the QB reading (pre and/or post-snap) a conflict player or conflict area of the defense, usually on the 2nd level to determine whether to hand it off or pass it.

Any throw tagged to a read run play that is caught at or behind the LOS, I chalk up to the evolution of the option play, usually within modern day spread formations, whether it’s triple or double option with a perimeter throw stretching the defense horizontally.

The key difference being that Linemen can be downfield and receivers can engage on a block downfield (rules may vary here based on league) at the time of a pass (or a long pitch) thrown behind or at the LOS.

The challenge with true RPO’s to defenses is the very nature of the conflict, the rule prohibiting offensive linemen from climbing past the LOS gray area to run block. This enhances the effectiveness of the play, clouding linebackers and 2nd level safeties keys.

Depending on the league or level of play, that gray area falls from as little as 1 (one) yard to as far as 3+ (three) yards beyond the LOS, with officials becoming more cognizant of this rule and keen to enforce it with defensive coaches and players constantly in their ear after a successful RPO or film session showing how Offenses are stretching the rule to their advantage.

Gap scheme runs (Pulling Linemen), which by nature are longer developing plays, tend to be the biggest culprits to stretching the rule.

How the H-Back Can Help

The development of the H-back (H/Y/F/TE) position is as comparable in excitement and buzz as the RPO is to play development. This multi-dimensional player has blossomed into a formidable weapon in today’s diverse shot-gun offenses. When you pair the run blocking skills (physicality of an Offensive Linemen) with the pass catching and run after catch skills (finesse of a Receiver) of the top H-Backs, it’s hard to argue that another skill position is more diverse. With this comes a wide array of options for offensive minds in both the run and pass game.

The play in this article leverages the rule of eligibility downfield and diversification of the H-back. The H-back (unlike Offensive Linemen) is an eligible receiver. They can’t be called illegally downfield when pulling or leading through a hole (ie: H Insert, H Fold, H Wrap).

Many Gap schemes today use the H-Back in lieu of a Guard (Power/Wham/Trap/Kick), and Tackle (Wrap/Counter/Fold).

Why not use the eligibility factor to conflict the 2nd level of a defense similar to an RPO, while at the same time eliminating the possibility of a flag. Just remember, blocking downfield by any eligible receiver prior to a forward pass being touched is pass interference.

The diagram here illustrates a packaged play, an H Insert Read Play with the QB reading the End Man On The Line Of Scrimmage (EMOLS), similar to the popular “QB Wrap/Dart Read”. The compliment is a Play Action Pass (notice, not an RPO as the linemen are not in full run blocking mode, but instead aggressive play action pass protection, and the H is running his fold block insert path as he does with the Read Run Play), causing a conflict on the Mike and 2nd level. 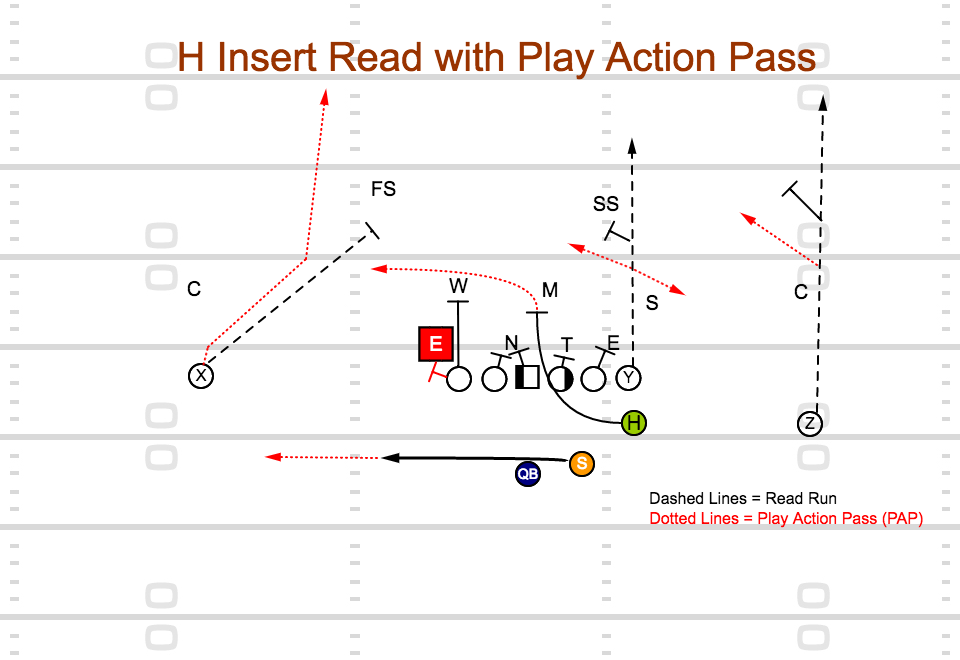 Here are some basic assignments versus the defense in the diagram: