It’s their last chance. Are they prepared? 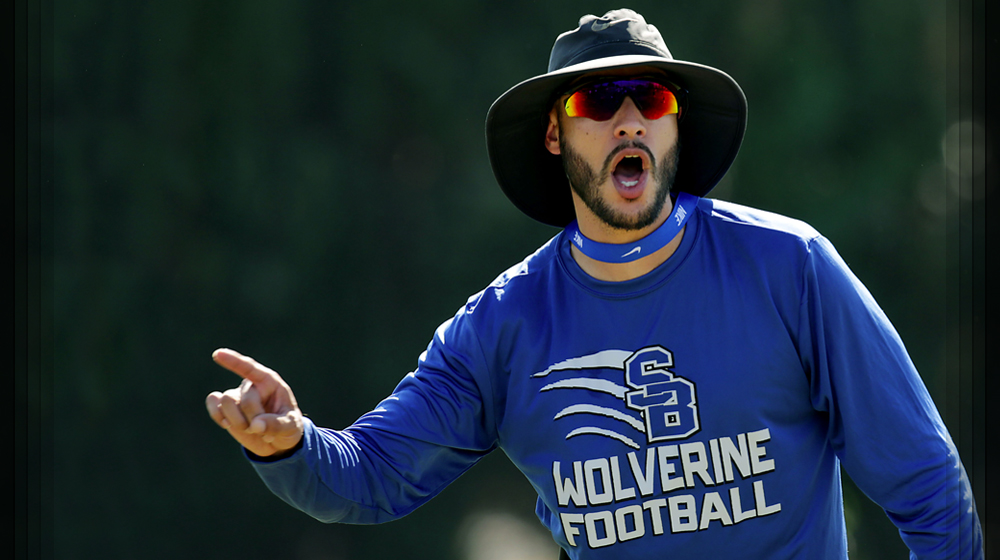 The new Netflix series “Last Chance U” blends “carefully crafted drama with personalities to care about,” writes SB Nation college football editor Jason Kirk. The documentary follows student-athletes at a community college in Mississippi who have a short window of opportunity to prove their skills and turn doubters into believers.

Schools you’ve likely never heard of are exactly where recruiters are going to find the next LeGarrette Blount, who played two seasons at East Mississippi Community College before transferring to the University of Oregon, and has since played for the Titans, Buccaneers, Steelers, Patriots and now the Eagles. Or Panthers QB, three-time Pro Bowler and Heisman Trophy winner Cam Newton, who spent a year at Blinn College in Brenham, Texas, before starting at Auburn University.

Daniel Algattas is the head coach at San Bernardino Valley College in California, and he knows what’s at stake for these student-athletes. It was the same for him when he was quarterback at Mt. San Antonio College before transferring to play at UCLA.

I was able to talk with Algattas about what these junior college athletes are up against. “Our student-athletes are on a very short time frame,” he said. “They only get two seasons, and then it’s either they’re out on scholarship or their career is over. It’s their last chance. It’s my job to give them every tool we can. I want them to know I care enough to get them up to speed and to develop them as players so their last chance matters.”

Algattas, who was hired in June of this year, is the fourth head coach at San Bernardino since 2009, with the Wolverines finishing at 4-6 last year. Touting a solid defense, the team has struggled to find consistency on the offensive side. Because he knows what’s at stake for the collective team and for the individual players, he’s found resources to take preparation to the next level. One of those resources is Just Play Sports Solutions.

How did you hear about Just Play?

I woke up one morning and got an email. The subject line caught my eye; it said, “It’s like Vizio, but on steroids.” I’d heard of Vizio and I’d definitely heard of steroids, so I clicked on it. I did my research and looked at the entire package, called Ryan Magee [regional sales director at Just Play] that same day and said we were ready to sign on. It was that quick.

That was while I was still the offensive coordinator and quarterback coach at Ventura College. When I took the head coach position at San Bernardino in June, I made a couple important calls and one of the first calls was to Ryan. I wanted to make sure we had the software. I asked, “How can we get this over here and how can we get our guys up to speed?” I knew our way forward as a team was getting our players familiar with Just Play as soon as possible.

How has it transformed the way you prepare your athletes?

It’s safe to say I’m old enough to have used the old VCR technology in my early coaching days. Back then the tapes were a copy of a copy of a copy; by the time the fourth guy gets notes from a teammate the only information all he might get are the routes, the general idea of what it’s supposed to look like, but no yardages, no coaching points.

For me, it’s not about telling somebody, it’s about teaching somebody. If you teach somebody, they have a mental recall system to where they’ve learned it and then repeated it, and now they own it. Just Play has the assignments, diagrams, videos and reports to help our players get there. They’re doing better on these assignments than they ever have. And when they slip up, you’ll hear coaches asking players on the field, “Are you on Just Play? Are you on your playbook?”

What has been the players’ response?

It’s been well-received. On the first day of practice, I’m making sure players know what I expect. I tell them they’re responsible for knowing these plays and knowing the correct assignments. By the next day, they’re asking, “Hey, how can I get into Just Play, Coach?” All of our kids talk about it and regard it as one of the most important parts of our program; it’s a tool that has helped them become self-sufficient and take a little bit of control over their future.

If they want to study, watch videos (or an example film from a game last year), take a quiz, do research, they can. They’re in there four times a week in the offseason when we’re doing spring or summer football, and almost every day during the season. It’s because it’s such a convenient way of getting them up to speed.

What else has been key for you using Just Play?

Well, this was something I’d never seen at a junior college, but on my first day of work – and their first day returning to (or starting) school with a new coach – we were able to run a full team period at practice because everyone knew the plays and had studied them over the summer. If you take that as a litmus test of where we are or where we’re going, I’d say we’re ahead of anybody else who isn’t using this type of technology.

We’re able to keep our practices manageable; we practice for an hour and fifteen minutes because we don’t have to spend time on the field going over mental preparation. On the field, we’re trying to get them to manifest their knowledge into physical performance; Just Play helps us take care of everything else.

Algattas knows what’s at stake for these student athletes, and he’s hell-bent on making sure they’re prepared for the next level.