The UConn Huskies are climbing back into familiar territory, as they’ll likely be the number one team in the national rankings next week, and they are doing it on the back of an impact freshman. This is not a new phenomenon for the Huskies, as Paige Bueckers etches her name into UConn lore.

I think it’s safe to say that Paige Bueckers has settled into the college basketball season. She has been on an absolute tear the last five games, averaging 28.4 PPG for the Huskies. She is not only scoring but scoring efficiently. Bueckers is shooting 61% from the floor and 65% from the three-point line over the latest five-game stretch. Her effective field-goal percentage over that time period is 71.3%. She is torching the nets on every court she steps on.

This recent stretch has been building throughout the season as Bueckers and her teammates got more comfortable with each other and the system they are playing in for Coach Geno Auriemma. Using Just Play’s Stat Factory, we can break down Bueckers’s rise through each month of games in this stop-and-go season.

UConn got a late start to the season, playing their first game on December 12th but were able to squeeze six games into the month. In the first six games of Bueckers’s career, she averaged 18.2 PPG on 55% shooting from the floor and 50% shooting from the three-point line. Her effective field-goal percentage was 61%. That was a solid start to what looks like it could be a monster career as the Huskies started off 6-0. 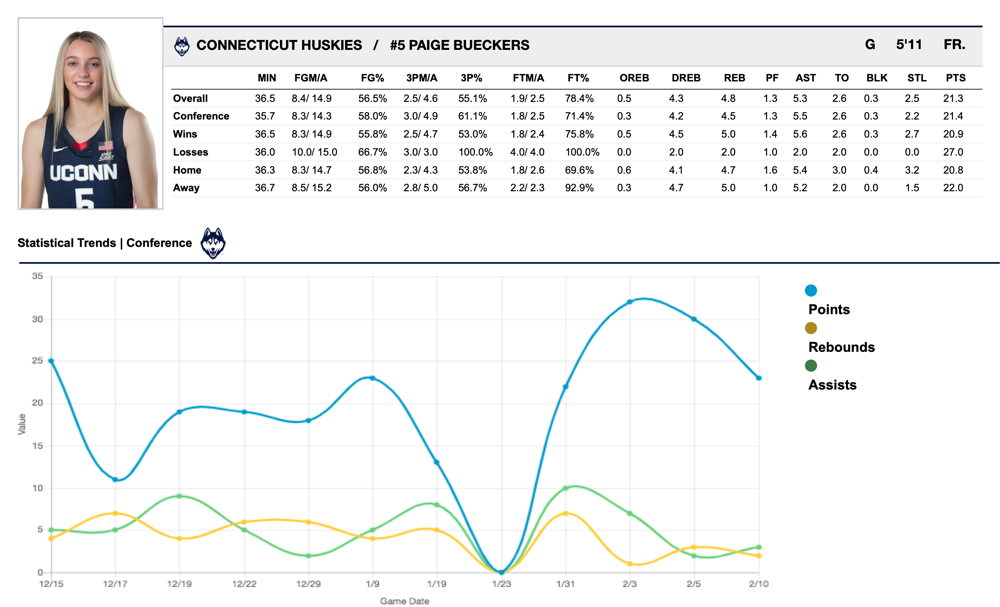 Then came February, and the training wheels have come off completely as Bueckers has exploded for 29 PPG in the four games played this month. She is shooting 59% from the field to go along with 56% from the three-point line. Her effective field-goal percentage is 68% in this four-game span. These are incredible numbers for a player that is certainly highlighted on every opponent’s scouting reports.

Paige Bueckers is making a huge impact on the UConn Huskies and college basketball. As the season progresses, so too does Bueckers on the stat sheet. Her play going forward will be an indicator of the Huskies’ success and also to their chances of winning another National Championship.